At the start of each year, we conduct an industry-wide survey on year-over-year recruitment, hiring and retention changes and trends. Employers, including executives, HR professionals and top-line managers, from across the commercial real estate industry share their company experience and perspectives on the previous year and on the year to come. We then compile the responses to provide a comprehensive report along with insights on the real estate job market as a resource to you and your business.

Will the Overall Positive Outlook for the U.S. Economy in 2017 Force Real Estate into a Bidding War for Talent?

However, 2016 may be an aberration. Looking back to 2015, 88% of respondents reported their company’s hiring would increase or remain the same as 2014. And they were right: real estate hiring reached record levels in 2014 and 2015, after a 5-year hiatus from 2008 to 2013 as our industry waited to recover from the global financial crisis. By 2016, most companies had recently hired and were waiting to see what the election would bring. 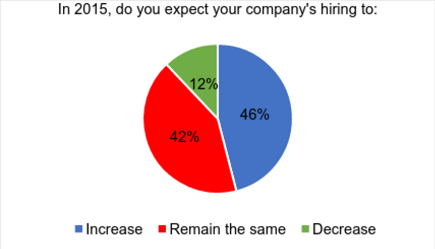 60% reported higher salaries and/or commissions in 2016, plus a whopping 69% of our respondents had received a bonus the previous year. 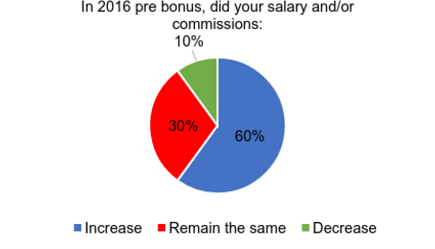 In the war for talent, 14% of our respondents reported a 20% increase in compensation, while another 15% received an increase of more than 10%. The price for top talent in 2017 could push the needle even higher.

70% expect their total compensation to increase in 2017.

53% of respondents believe the change in leadership will have a positive effect on the U.S economy. 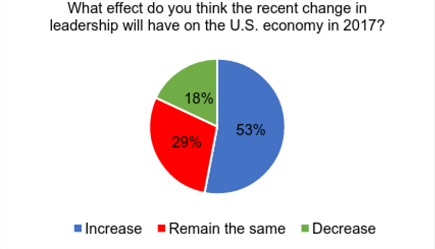 “The biggest benefit to my organization will be stability, and congress approving a budget for the first time in years.”

“I have a very positive perspective with a business professional as President, and the professional cabinet he is putting together – very exciting after 8 yrs. lacking all of this!”

“I am more optimistic than I have been in over 10 years, I am hoping for another Reagan revolution, but I want the deficit also handled with increased growth, as well as the environmental issues. If we dirty the planet to get economic gains, it is all for not.”

“Cautiously optimistic. We may be at the end of a 6-year growth cycle though which means the business is due for a reset.”

18% believe the change in leadership will have a negative effect on the U.S. economy in 2017.</strong<

“in terms of the real estate cycle, we are reaching the upper points so people will naturally become a bit more cautious. They will become much more selective on their investments for a period of time.”

“All our investors are from overseas. If US relations with their home countries get bad, they would reduce or terminate investing in the U.S.”

“High cost of living along the coast will make it even harder to place talent in already tight markets; wage growth has not kept up with costs.”

42% of respondents believe Foreign Relations will have an impact on their business in 2017.

“Volatility will decrease the buyers pool and keep buyers on the sidelines due to caution.”

“The dismantling of NAFTA and trade fights with China could hurt the economy in general, leading to decreased real estate demand. The impact of new policy on foreign trade will have more effect than increasing rates in the next year.”

“It will be a mixed bag. US economy might do ok, but our international relations will suffer and the global economy will suffer as a result.”

“I am afraid that if Dodd Frank is disassembled that we will not survive another mortgage crisis.”

“Hoping that we see a HUUUUGe reduction in regulation.”

“We have held off hiring and expanding – if Clinton had won, we would have reduced staff and relied on consultants almost exclusively, out of fear of onerous regulations. Now, we will probably on-board these services and build a real company, not an operating shell.”

“If interest rates continue to rise we expect a lot of owners will no longer be able to afford their assets. This may create a unique buying situation. We have capital ready for such an event.”

“Interest rates will undoubtedly play a role in decreased real estate values except in core markets. Investor confidence definitely waned in 2016 vs. 2015 and I would expect a similar trend in 2017.”

“Still too much perceived discrimination against older workers, especially those over 65.”

“It will be a year of increased productivity, with less personnel hired and existing staff being asked to do more; in addition, I expect that older workers (55+) will be pushed out (job descriptions, reorganizations. lower productivity) and exec mgmt. will hire younger, less experienced employees for lower pay.”

Please peruse more perspectives and insights our industry shared in their own words (starting with one of our favorites):

“Dear Lord, please give me one more boom and I promise I won’t screw it up this time…”

In your own words, please provide any perspectives and insights on the year ahead…

Methodology: The survey was emailed in the last weeks of December, 2016, to registered Employers and Job Seekers who have opted-in for emails on the SelectLeaders Real Estate Job Network. The survey was conducted using a web-based survey program.